Edo Period: The early modern era in Japanese history from 1603 to 1868, during the reign of the Tokugawa family (Tokugawa period).

Geisha: Female professional who is highly trained to entertain men in song, dance and conversation.

Gidayu: Music that accompanies the Bunraku puppet theater (male); became popular when it was performed by women in concert halls without puppets.

Hikinuki: A skillful quick costume change of the dancer’s kimono on-stage, facilitated by the koken to dazzle the audience.

Iemoto: The headmaster system which governs many Japanese cultural arts. The Iemoto holds the title of headmaster of the art, and the position is attained through inheritance, marriage, or even adoption
if no family successor is available to continue the artistic lineage. Japanese classical dance falls under the Iemoto system.

Katsura: Wig used for dance (and Kabuki); wig style is determined by age of character, class, role, and gender.

Kiyomoto: Genre of music; traditional form that accompanies Kabuki dances; has the highest level of singing (words and emotions) and least amount of percussion; is narrative.

Koken: A stage assistant to the dancer; black attire suggests his invisible presence. His duties involve giving, taking or manipulating dance props, performing hikinuki in some dances, and helping the dancer
as needed.

Kouta: literally means, “little song”; can be sung in one minute, or up to three or four minutes at the most; accompanied by the shamisen; often performed by Geishas in music and dance.

Living National Treasure: Individuals designated by the Japanese Minister of Education, Culture, Sports, Science and Technology as Preservers of Important Intangible Cultural Properties (e.g., craftsmen, performers), based on Japan’s Law for the Protection of Cultural Properties.

Nagauta: literally means “long song”; is the genre of Japanese traditional music which accompanies the dance segments of the Kabuki drama; is lyrical.

Natori: Professional stage name awarded to students who pass the qualifying dance exam(s) of their particular school; the student’s name is a combination of the school name + part of the teacher’s stage
name and part of a personal name selected for the student.

Ryu ha: School. There are many different Japanese buyo schools. Bando, Hanayagi, Wakayagi, Azuma, Fujima, Nakamura, and Nishikawa are among them.

Shamisen: The main instrument of Japanese classical music; held somewhat like a banjo; has a square body, long neck with three strings, plucked with a plectrum.

Soke: Grandmaster of a dance school; comparable to an “Iemoto.”

Sousaku buyo: A more contemporary form of Japanese dance, sometimes in the style of ballet or modern dance. Incorporates the traditional forms with new, creative ideas.

Tachiyaku: Strong male role or the actor who plays such roles in the Kabuki theater.

Yamatogaku: A newer genre of Japanese music developed in 1933 which incorporates Western styles of vocalization such as harmony, singing in round, and humming. This modern style often features
female vocalists, who are accompanied by shamisen and percussion instrumentalists. 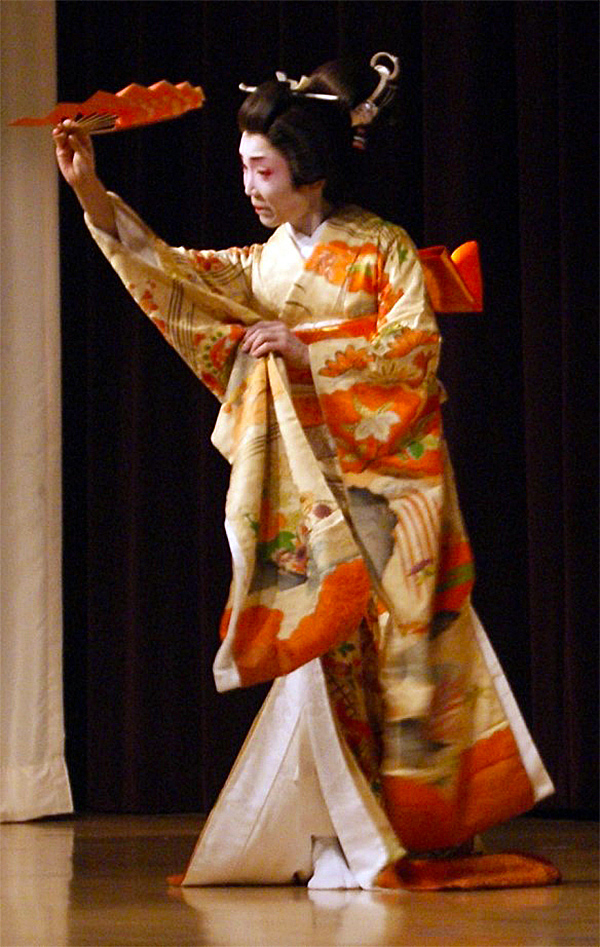